One place - 1000 possibilities.
Discover the whole diversity of our monastery complex and let yourself be inspired.

One place - 1000 possibilities.
Discover the whole diversity of our monastery complex and let yourself be inspired.

Our farm shop on site

Nature, enjoyment and hospitality – with us, the Harz shows its most beautiful side. At the foot of the Harz Mountains and at the gates of the World Heritage city of Goslar, the Wöltingerode monastery has watched over the Oker Valley and the adjacent lands since 1174. To this day, the complex is a wonderful starting point for excursions – but also has a lot to offer within the historic monastery wall. 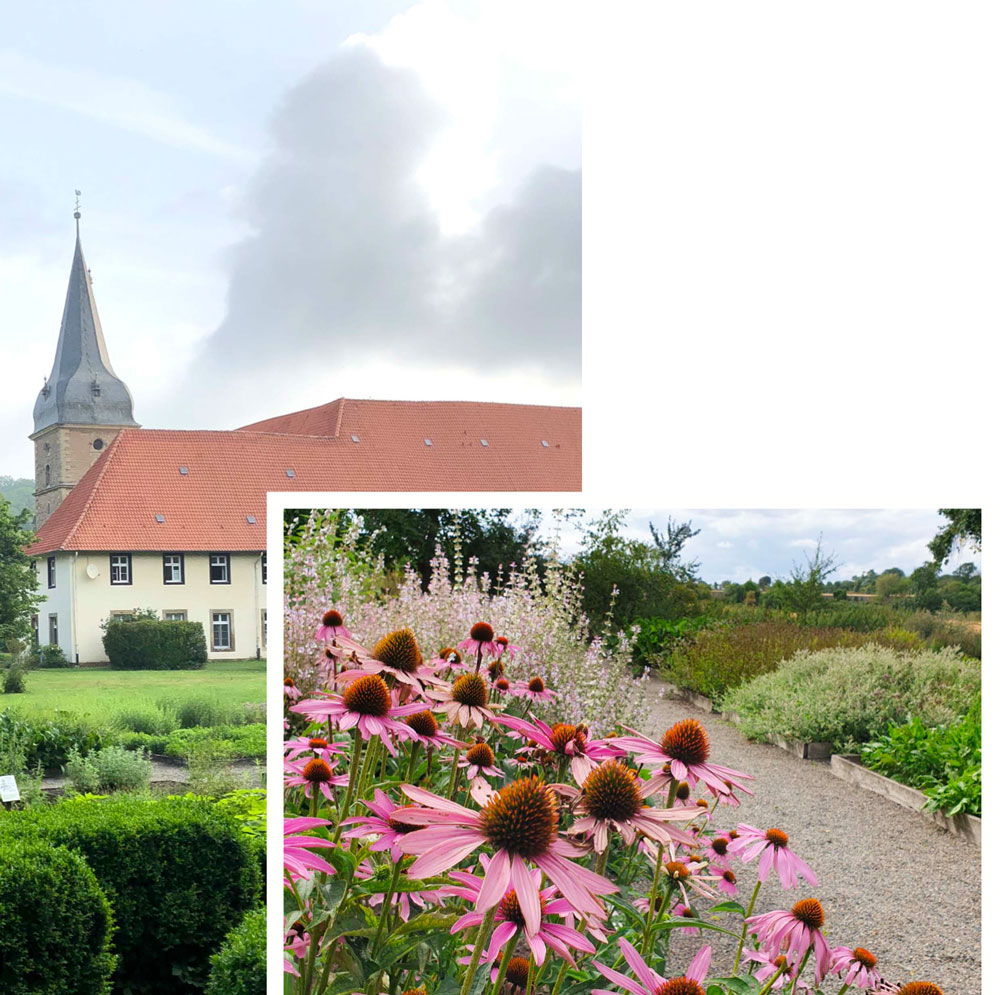 Hildegard von Bingen lived from 1098 to 1179 in what is now Rhineland-Palatinate. Nevertheless, the work of the abbess has left its mark on Wöltingerode Monastery to this day. Hildegard von Bingen, who was accepted into the monastery as the tenth child of the family at the age of 8, officially became a Benedictine nun at the age of 15 after comprehensive scientific training and finally founded her own monastery, is still considered one of the most influential female polymaths today. Her teachings of the connection between people, environment, body and soul have a strong appeal.

The natural and medicinal writings of Hildegard von Bingen, in which she combined knowledge of medicinal plants and diseases from the Greek-Latin tradition with traditional regional approaches from the people, are of particular importance. In her Physica, for example, she describes almost 300 herbs, shrubs and trees and their healing properties.

The knowledge of Hildegard von Bingen also found its way into the herb garden of the Wöltingerode monastery. As in other monasteries, it was of great importance, not only for the medical care of the nuns. The monastery also played a major role for the population as a contact point for complaints. The experiences made here were a source of knowledge for the new secular pharmacies from the 14th century.

In our herb garden, visitors can now get an idea of the shape of a monastic garden and go in search of traces. Which plants do you recognize by their scent? What was this herb good for again? Which flower can do more than just look pretty? Have fun exploring!

Freshly tapped beer from the Altenauer brewery and finally good food in the open air again.

holiday in the country

Summer in Wöltingerode: an experience for the senses. Beautiful nature, many excursions and the Brocken almost on the doorstep.

Rattling tractors, craftsmanship and a program for the whole family: the highlight of the annual calendar.

Visit our winter wonderland and discover countless gift ideas for the holiday. Also a culinary highlight of the Christmas season.

Here everything revolves around the most beautiful day in life. Discover a wide range that will make your wedding an unforgettable experience.